On Tuesday, as the US dollar index continued falling, USDCHF resumed declining and hit a 1-month low recently.

The US economic data was weak

The US Richmond Fed Manufacturing Index (May) reached -9, the lowest since May 2020. The US New Home Sales (April) decreased to the lowest since 2019. The market lowered the expectation that the US Fed will increase the interest rate by 50 basis points in September.

In general, USDCHF will fall further as the US dollar continues falling. Investors should focus on Swiss CFA economic expectation index (May) and US durable goods orders, m/m (April) during the day.
25.05.2022 XTrend Speed 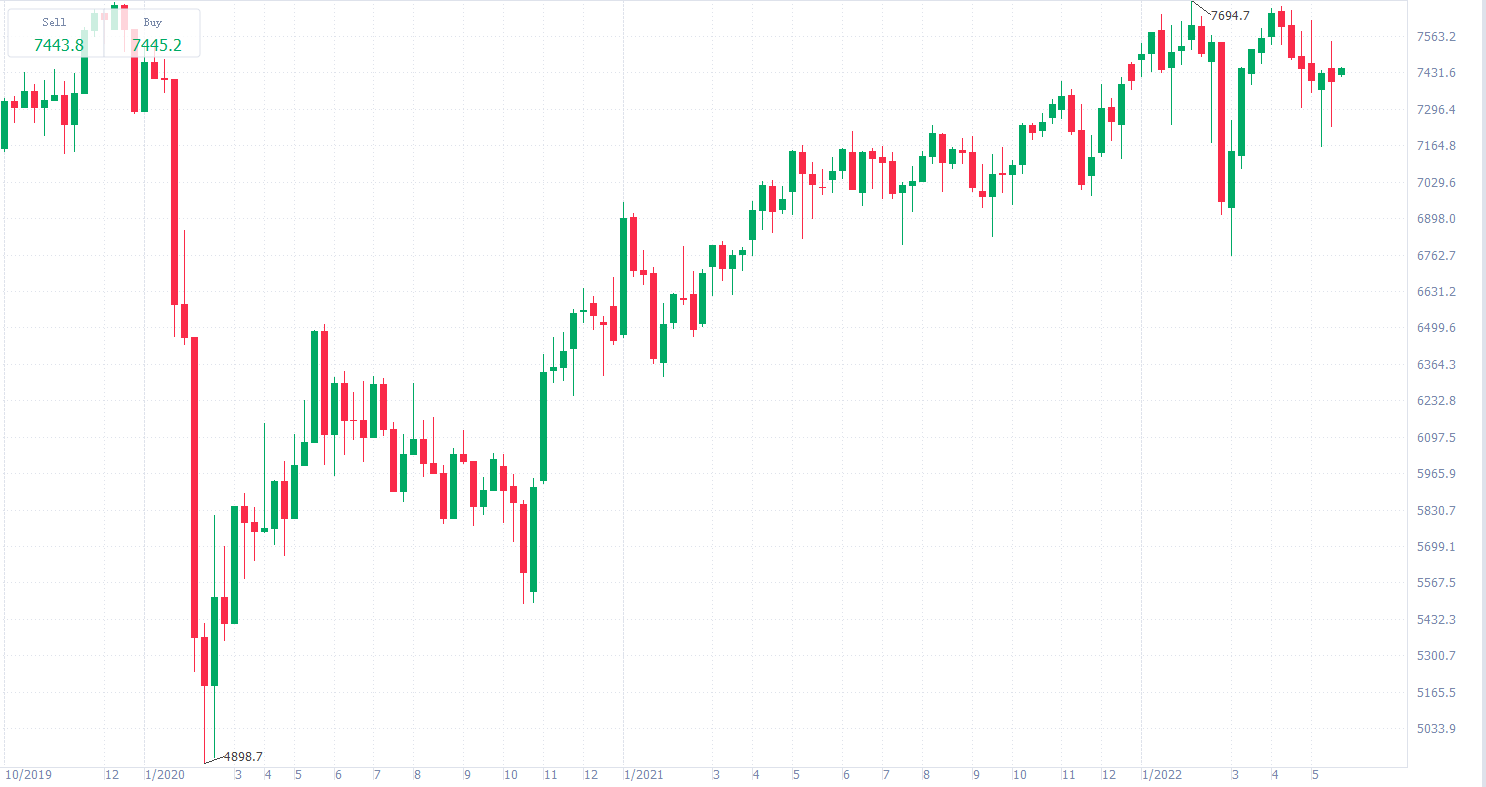 Basic Introduction
The FTSE 100 Index abbreviated for London’s Financial Times 100 Index is a stock index of the 100 largest companies listed on the London Stock Exchange. It is compiled by the Financial Times of London. The index is a barometer of the UK economy and one of the most important stock indices in Europe.

Symbol Introduction
The UK100 covers about 80% of market capitalization in London stock exchange. It is an important indicator of London stock market. You can trade UK100 on XTrendspeed.
Factors affecting UK100
Economic change
The UK100 will increase as the UK economy becomes stronger, while the UK100 will decrease as the UK economy becomes worse.
Inflation
With moderate inflation, rising inflation will boost stock market. Conversely, it is bad for the stock market under hyperinflation.
The BOE monetary policies
Stocks will fall when the BOE tightens monetary policy. On the other hand, stocks will rise when the BOE eases monetary policy.
The UK government bond yield
In general, the UK100 falls as the UK government bond yield rises. Conversely, the UK100 rises while the UK government bond yield falls.
Political situation
Changes in the political situation in a country and internationally will have an impact on the stock market.
Important events
In May 2018, UK100 hit a historical high of 7909. As investors were worried about Ukrainian situation, the UK100 decreased by 3.9%, the largest daily decline since June 2020, to 7207.01. The market capitalization decreased by 77 billion pounds.
23.05.2022 XTrend Speed

The minutes of the RBA meeting showed more timely evidence that labor costs are rising amid a tight labor market and are likely to recover further in the period ahead. The Australian economy is being supported by household and business balance sheets. While the rise in inflation largely reflected global factors, members noted that strong domestic demand and capacity constraints were working.

Members agreed that the preferred option would be to raise rates by 25 basis points. The committee is considering whether previously set conditions for raising the cash rate are met. Members observed that if Australia’s inflationary psychology shifted in a lasting way, it would be harder to bring inflation back to target. Actions of this magnitude will help show that the committee is returning to normal operating procedures.

Members unanimously agreed that further interest rate hikes may be needed to ensure Australia’s inflation returns to target over time. There will be an opportunity to reassess the rate setting in a relatively short period of time. Household spending will be closely monitored as interest rates rise. The rate hike conditions set by the committee have been met.

The increase in Australian inflation hit a record high

The RBA raised its benchmark interest rate by 25 basis points to 0.35% in early May. It is the first time the RBA has raised interest rates since 2010. The analysis pointed out that the rate hike came faster and larger than the market expected, aiming to curb rising inflation.

Australian dwelling prices increased by 24% in 2021, the largest annual increase since the Residential Price Index began to be published in the third quarter of 2003. Dwelling prices in Hobart, the capital of Tasmania, and in Brisbane, the capital of Queensland, rose by as much as 29.8% and 27.8% respectively. Rents have also risen sharply in many places. Cassandra Goldie, chief executive of the Australian Council of Social Services, said: “about 2.4 million people earn less than $70 a day. Rising rents have hit low- and middle-income groups hard.”.

RBA Governor Philip Lowe points out that in the past, prices and wages have usually been in a spiral upward relationship, but this trend has weakened significantly since the outbreak of the epidemic. The data released by the Australian Bureau of Statistics in February this year showed CPI and daily necessities would rise by 3.5% and 7% respectively in 2021, while wages would only rise by an average of 2.3%. Australian economist Chris Murphy said: “overall inflation in Australia will remain high this year and is expected to hit around 6% in the fourth quarter.”.

Technically speaking, the decline will narrow, and focus on whether AUDUSD will rebound

US April Retail Sales were Better than Expected

In the New York session on 17th May, the United States announced April retail sales, which is better than expected.

The US Fed has increased the interest rate by 75 basis points at two meetings to fight against the inflation. Powell said at May 15th Press Conference that it was difficult to cut the inflation amid the economic growth.

The US economy shrank by 1.4% unexpectedly in the first quarter, lower than the forecast of 1.1%. The market accepts the view that trade deficit leads to economic contraction. However, the US Fed will face huge pressure to continue raising the interest rate if the economic recession occurred in the second quarter.

Andrew Hunter, a senior economist from Capital Economics said that the increase bin US April core inflation would make it possible for the US Fed to continue raising the interest rate by 50 basis points. However, Andrew added that the US Fed may slow the tightening of monetary policies in later this year as the commodity shortage eased, the wage growth slowed down and the inflation fell.

Another analysis pointed out that the US Fed’s current round of monetary policy tightening is relatively backward. The related interest rate hike should have been started in the second half of last year, but it was postponed until March this year. There are another five interest rate meetings in the future. Judging from the current inflation data, the US Fed is expected to raise interest rates more than expected. The US federal benchmark interest rate is between 0.75% and 1% now, and it is expected to reach around 2% this year.

Federal Reserve Chairman Jerome Powell said after the May meeting that the US Fed may raise interest rates by 50 basis points at each of the next two meetings.

Analysts believe that the US Fed is likely to maintain a more aggressive rate hike at its June interest rate meeting.

Technically speaking, focus on whether the US dollar index will fall

On the chart of the week, the US dollar index rose and then decreased. Investors should focus on whether it will reverse. The US dollar index will continue falling with potential support at 102.3 if it is capped at 105.0.

US gasoline futures hit a record high, and US crude oil inventories decreased for the 6th straight week last week, boosting USOIL to the highest since April 2020. US crude oil futures closed at the negative area in April 2020.

“US gasoline inventories haven’t increased since March,” said Robert Yawger, executive director of Mizuho Energy Futures, noting that gasoline demand will climb as the US enters the driving season from the Memorial Day.

Gasoline and diesel prices at the US gas stations rose to record highs of $4.43 a gallon and $5.56 a gallon, respectively, on Friday, the Automobile Club AAA said.

The European Union said that it was considering delaying the implementation of the ban on Russian oil, which has eased the market’s concerns about the shortage of crude oil supply. However, if oil demand maintains seasonal growth in the later period and the EU imposes an embargo on Russian oil, the supply and demand structure will tighten in the crude oil market, raising oil price. Oil price is expected to be at high levels.

Technically speaking, focus on whether USOIL will reverse amid the bullish market trend

On the chart of the week, USOIL continued rebounding. It is expected to rise further. USOIL will rebound further with potential resistance at 115.80 if it is steady above 110.00.

Is the US stock market closed today?

Why do we need stock indexes?

xtrendspeed.com is owned and operated by Rynat Capital (Pty) Ltd.

Restricted Regions: Rynat Capital (Pty) Ltd does not offer its services to residents of certain jurisdictions such as Afghanistan,Albania,America (United States of America),Australia,Bahamas,Barbados,Belarus,Botswana,Burundi,Cambodia,Canada,China,Democratic People's Republic of Korea (North Korea),Democratic Republic of the Congo,Egypt,Ghana,Iceland,Iran,Iraq,Jamaica,Japan,Mauritius,Mongolia,Myanmar,Nicaragua,Pakistan,Panama,Sudan,Syria,Uganda,Ukraine,Venezuela,Yemen,Zimbabwe,United kingdom，Jordan, Mali, Trinidad and Tobago, Turkey.